Plumbing facts that may surprise you.

Many think indoor plumbing came to America in 1829 when the Tremont Hotel in Boston became the first hotel in America to have indoor plumbing. It would be another 60 years before Boston started treating it's sewage and waste water. But archaeologists have discovered part of a water plumbing system at the Pyramid of Cheops in Egypt. Additionally, evidence of indoor plumbing has been found at various Egyptian sites dating back to 2,500 BC.

The Egyptians were also the first known civilization to use copper piping. Copper was a metal the Egyptians could shape and mold. They laid copper pipes in some of their palaces. 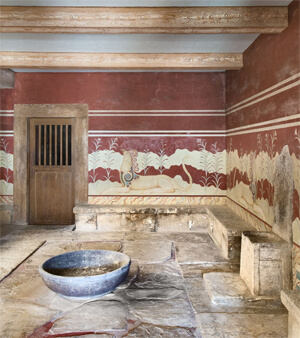 The Palace of King Minos at Knossos
Perhaps you've heard the joke Sir Thomas Crapper invented the toilet. He did not. The earliest known toilet belonged to King Minos of Crete around 2,800 years ago. It flushed water.

Queen Elizabeth I also had her own flushing toilet in 1596. It was built by her godson, Sir John Harrington. Historians believe the toilet nickname "the John", comes from his name.

Installing a low-flush toilet can save 15,000 gallons of water or more a year.

The "bathroom," has had many different names and terms throughout human history and throughout different cultures. Historians report Egyptians called it the "house of horror." It was called the "necessarium" by the Romans. Tudor England referred to it as the "privy" or "house of privacy," while the French have been known to refer to it as la chamber sent ("the smelly house").

The professional plumbers here at All Trades are ready to provide the residential or commercial service you need. We service Las Vegas, Henderson, Boulder City, and most parts of Clark County, Nevada.