The Tales of Terrible Clogs

How our plumbing gets clogged up. 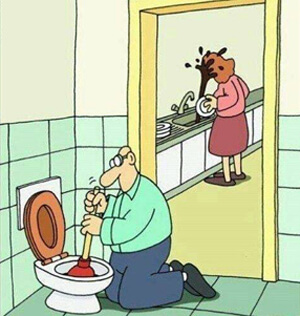 There is nothing more scary than watching as a bowl full of filthy toilet water threatening to rise up, overflow the bowl, and spill onto your clean bathroom floor. At first sight, you think, "Oh, that doesn't look so bad," which quickly turns to self-questioning, "I think it's going to stop," and then the real panic sets in: "It's definitely not stopping."

But even scarier than the dreaded overflow are some of the downright crazy stories we’ve seen and fixed over the years. Here are a few of the most hair-raising tales of terrible clogs, from plumbing professionals at All Trades and average Joes alike.

"A friend was visiting me at college during the biggest drinking weekend of the school year. I took her to a party where we rather quickly got drunk. However, when my friend went to take care of her business, the toilet was occupied, so she vomited in the shower. The drain wasn’t big enough, so we had to get a plunger, mop, and waste bin to clean out the shower. My friend never visited me again." — Janet P., Las Vegas, Nevada.

A Chicken In Every Pot

"I caught my spouse trying to throw away of a roast chicken carcass using our toilet. He thought a toilet could work just like a garbage disposal. Unfortunately, we’re still together.” — Sally R., Henderson, Nevada. 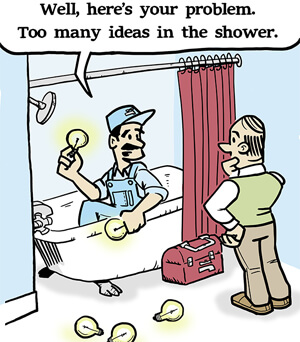 "At work we keep a list of all the crazy things that we have found clogging up work pipes. Among our most unbelievable are: an entire mop-head, dentures, an actual (but dead) snake, the family goldfish, and a pair of men's boxers. We once found an completely intact bedspread while doing a drain cleaning. We still don't understand how this was even possible." — Dennis S., North Las Vegas, Nevada.

"At work we get calls for many crazy clogs. A few of the crazier ones include candle wax, toys (marbles, Hot Wheels, and tiny action figures), all dropped down into kitchen and bathroom drains. One technician found lettuce clogging up a washing-machine pump. The owner wanted to spin-dry a large bunch of lettuce to get ready for a party that night." — Larry B., Las Vegas, Nevada.

"One time we went to the home of a retired U.S. Army vet to repair his washing machine. He asked us to be on the lookout for a St. Christopher medal. It was gift from his wife some 60 years prior, during his deployment in Korea. The medal had gone missing from the vet's wallet when he accidentally ran the wallet through the wash cycle. I went to work on the washer, but didn't see a trace of the missing medal. I decided to take a second look, dismantling the old tub and basket that were still on my truck. Buried in a small hole in one of the ports at the bottom of the tub was the lost medal! I didn’t want to risk putting it in the mail, so I dropped it off back at their house. They were overjoyed when I showed up at their house with the medal in my hand." — Tom P., Boulder City, Nevada.

All Trades in Las Vegas, Nevada is here to serve you and clear your clogged drains. Contact us today for a no-hassle easy to understand quote. We offer same-day service. We service Las Vegas, Henderson, Boulder City, and most of Clark County, Nevada. 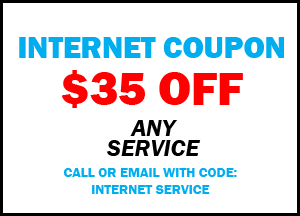