A cured-in-place pipe (CIPP) is one of numerous trenchless repair methods used to repair existing pipelines. CIPP is a pipe within a pipe. It is seamless and without joints. A wide range of pipe diameters can be rehabilitated. CIPP can repair pipelines with diameters as small as 4 inches and as large as 100 inches or more. Common applications are for sewer, water, chemical, and gas pipelines.


Very little digging is required with CIPP repair. After the point of repair is identified, an entry and exit point are excavated. The damaged pipe is cleared of any blockages. Hydro Jetting may be used to help clear blockages.

A resin-saturated tube that is made of fiberglass, polyester, or another similar material is pulled through the damaged pipe. Inside the liner is a balloon that is inflated with either air or water. The tube is held in place with the balloon and allowed to cure. Curing can be accelerated with hot water, steam, or ultra violet light.

After the tube has fully cured the balloon is deflated and removed. The new pipe is inspected with a CCTV video feed. After a successful inspection the new pipe is ready to use. Due to the lower excavation requirements of trenchless pipe lining, it is often less expensive and less disruptive than traditional, "dig up and replace" pipeline repair methods.


Eric Wood invented cured-in-place pipe technology in London, England in 1971. His name for the technology was insitu form. The name is Latin and means form in place. Wood applied for a US patent in 1975 and it was granted in 1977. Insituform Technologies (from Wood's original name) was created. They held the patent and were the only company allowed to utilize trenchless pipelining repair technology.

In the late 1970's Insituform Technologies began commercial and residential applications in Japan and Europe. In the early 1980's the process started being used in residential applications in the United States. In 1994 the patent expired and CIPP technology has been in the public domain ever since. Numerous companies immediately emerged and started using CIPP repair.


If a pipeline is broken, leaking, or structurally unsound, CIPP offers an alternative to traditional "dig up and replace" pipeline repair methods. Sometimes existing access points are enough to undertake a repair, in which case no excavation is required at all. If excavation is required it is usually minimal and does not require extensive disruption to the premises.

CIPP has a smooth interior. There are no joints. As a result, CIPP can repair pipes with bends. Special design considerations must be made when repairing bends, in order to prevent stretching and wrinkling.

The overall cost of CIPP is oftentimes far less than that of traditional pipeline repair. 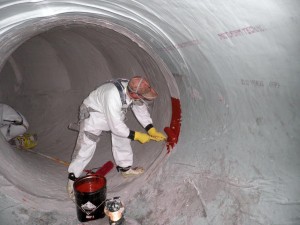 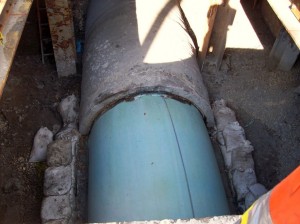 
Any blockages that exist in the broken pipeline must be cleared before CIPP repair can be undertaken.

The time for CIPP to cure varies depending on the size of the project. Cure time ranges from a few hours to 30 hours or more. During this time period the flow to the existing pipeline must be totally shut off or bypassed. The curing process must be carefully monitored. After curing, the new pipeline must be thoroughly inspected and tested.

Repairing bends must be undertaken carefully. Special liners must be used that resist wrinkling. The larger the diameter of pipe, the more likely it is that a bend can be repaired. The liner material used in common sizes is oftentimes made of a felted fabric (non-woven) that does not go around bends well and liner wrinkling may result. When repairing bends, a liner made of a woven fabric is required.

After a pipeline has been repaired with CIPP, the pipeline can no longer be snaked with a machine. The pipeline must be cleaned via Hydro Jetting.


We are experts in CIPP and trenchless pipe lining. We have the equipment and experience that you need. Let us evaluate your situation and determine if trenchless pipe lining is a viable solution for you. If it is, you may be able to get that broken pipe repaired at lower cost and with minimal site disruption.