And, how to solve them. 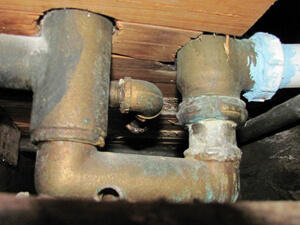 Older houses are often cherished for their character, charm and sometimes, historical significance. Many that are still standing were built to unique architectural specifications and constructed with materials that would be prohibitively expensive today. For young people looking to buy their first home, an older home that needs a little extra care is often an attractive (and sometimes their only) option.

Just because old homes may have an array of plumbing problems doesn't mean there aren't any solutions or options. Here are a few of the most common plumbing problems you will likely encounter in your old home. Find out how you can solve these problems as well.

Any home built before 1990 could have pipes made from materials that are no longer approved by current building codes. This in and of itself is not a problem, it just means a new house could not be built today in the same way your older home was built. If the home has been renovated within the last few decades, some or all of these pipes might have been replaced. But it's always a good idea to have your home's plumbing inspected to ensure there are no unexpected surprises.